Theth - Albania, Best things to do and see 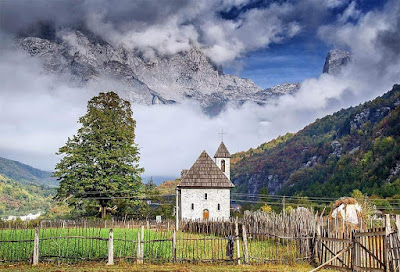 Reaching Theth is not easy. The road is easy to find (there's only one), but what's really challenging is driving. From Shkodra you have to follow the SH1 to Koplik, then take the SH21 northeast. This secondary road climbs at first gently and then increasingly steeply into the Prroni i Thate Valley, a very wide valley surrounded by mountains that reach an altitude of almost 2000 m in a breathtaking landscape.

Then, beyond Bogë, it becomes steeper and steeper until it reaches the Buni i Thores Pass (1786 m). From here begins a 15 km stretch of dirt road that you cover in about two hours through potholes, mud, very narrow passages (if you cross another car it is often necessary to find a widening to exchange the pass), but also an alternation between forest and wide openings. You will also have to cross two fords before reaching the valley of Thethi.

If you don't have the right car, it's better to take public transport: every hour, vans and minibusses leave Shkodër in the direction of Thethi. The ticket costs 700 lek; the stop is in Hysen Lacej Wrinkle. 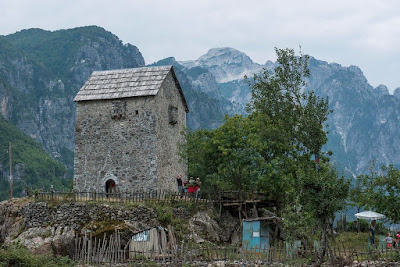 The effort you will have made will be rewarded, not only because you will arrive in a hidden and wild part of Europe, as few remain, but also because you will come into contact with one of the most secret and fascinating aspects of Albanian culture, the Kanun.

The valley of Thethi is in fact one of the cradles of the real mythology that writers, travelers and ethnographers between '800 and '900 created about the kanun (customary laws), besa (the given word), feuds and revenge that would regulate for centuries the rhythms and destiny of the lives of the mountain people of northern Albania.

Things to see in Thethi

Although these phenomena are still marginally present, the only traces you will find in Thethi are some tower-houses once used by families involved in blood issues. The Cradle of Theth, one of the most important and best-preserved self-contained towers in this part of the country, is a shining example.

The kulla, which seems to be more than 400 years old, stands on a rocky spur that serves as the floor of the ground floor and houses a small ethnographic exhibition. Visiting it, you will still perceive the absolute deprivation to which those who were self-contained here were subjected, and from the loopholes, you will appreciate the strategic position with which the guarded man controlled the arrival of his possible aggressors.

The opening hours are quite variable, while the entrance ticket costs 150 lek; not far away is the Church of Theth (Kisha and Ththit in Albanian), built-in 1892.

For the rest, what Thethi has to offer are the treasures of the surrounding National Park. Among the most easily accessible destinations are the Grunas Falls (Ujvara and Grunasit in Albanian), which are located at the canyon of the same name about 4 km from Thethi's main cluster of houses, and the Spring of the Blue Eye, not to be confused with the Blue Eye. 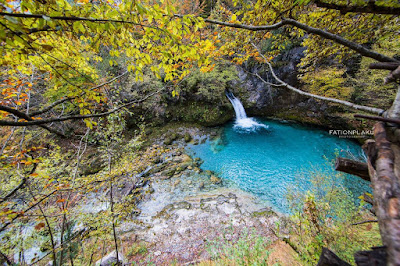 It is a resurgence of freshwater that in its center takes on a blue color of a very particular intensity. You can reach it with an excursion of about three hours (it is 11 km) along a well-marked path: go southwards along the valley of the Shalë River until you meet the valley of the Zi Stream and go up to the source.

September 04, 2008
This was the capital of the Illyrian tribe of Amantes. Its ruins are in the village of Plloca in the Vlora river valley. It was founded in the fifth century B.C. and covered an area of 13 ha. The city had its own acropolis and a Doric style temple dedicated to Aphrodite, constructed in the 3rd century B.C. The most preserved
Post a Comment
Read more

April 23, 2020
The coastal town of Durres may not be the favourite destination of many Albanians who have grown tired of it, but it is becoming a magnet for tourists from Northern Europe who have booked some of the best hotels and resorts for the next four months. Closed to tourists for almost five decades during a communist dictatorship, Albania has a rather late tradition with tourism compared to its regional competitors, but quality investment and services over the past decade and a mix of natural and cultural heritage present since ancient times have qualified Albania as "the last secret of Europe" and a destination to visit. "This is the first group of tourists from Scandinavia and we expect more from Sweden and Norway. People from Scandinavian countries are very interested in seeing Albania and we wish them a wonderful experience," said Rolf Castro-Vasquez, director of Tirana International Airport, the only airport in the country. Charter flights will regularly connect Copenha…
Post a Comment
Read more