Byllis has been the largest city in Southern Illyria, but despite this fact, has been mentioned relatively late by historians and ancient geographers. Its walls have a length of 2250m and over an area of 30ha. In 49-48 B.C. the city surrenders to the forces of Caesar and served as a base for his large army.

Stephanus of Byzantium, wrote that Byllis was established by Neoptolemus, Achiles' son. Despite this account, the construction techniques date the site not earlier than 370-350 B.C. Around 270 B.C. the city was the center of a koinon, a political organization of the time, covering about 20km2.
Byllis became a Roman colony, during the first years of the dominium of Augustus, and its name became Colonia Iulia Augusta. During the Late Antique period Byllis became an important center and several large Palaeo-Christian basilicas were constructed, all of them carrying lavishly decorated mosaics. 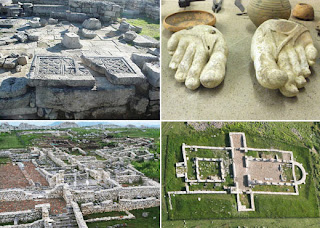 May 15, 2020
Prime Minister Edi Rama said the government intends to pass the law on the legalization of medical cannabis during this parliamentary session that will close in the summer. "I said before, this is not the time to talk about this issue, but to keep the situation under control with illegal cultivation and trafficking, the situation is now under control," Rama said. "On the other hand, we have been working on this project for more than a year, to do analysis, and in fact now the conditions are ripe. Where the ideas come from, I'm not the one fighting for copyright. This is now a global trend. I know we are on time and we will push this project forward. We are in time to approve it by this parliamentary session," said the Prime Minister.
7 comments
Read more