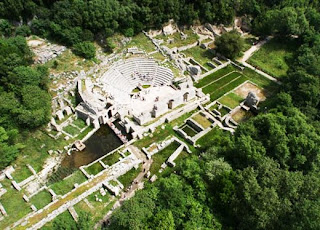 Butrint is situated on a low promontory on the southwest coast of Albania, south of the modern city of Saranda and opposite from the Greek island of Corfu. The site has been occupied since at least the 8th century BC, although myths associated with its origins speak of the city's foundation by Trojan exiles.
By the 4th century B.C. a walled settlement was established and the city became a successful cult site, dedicated to Aesclepius. Augustus founded a colony at Butrint and the town seems to have remained a relatively small Roman port until the 6th century A.D. Little is known of the site between the 7th and 9th centuries A.D. Its later medieval history was turbulent as the town was involved first in the power struggles between Byzantium and successive Norman, Angevin and Venetian states and second in the conflict between Venice and the Ottoman Turks. By the early 19th century it had declined to a small fishingvillage clustered around a Venetian castle.
Main monuments around Butrint would definitely include the elegant 4th century B.C. Greek theater with its fine cavea and Roman scaenae frons with a capacity of a. 1500 spectators, the associated Greek sanctuary of Asclepius, immediately to the west of the theater, the line of Roman-period courtyard houses and bath-houses, east of the theater disposed around the forum, the ruins of the Triconch close to the Butrint canal, a large Byzantine baptistery with its intact mosaic pavement dating to the early 6th century A.D., the well-preserved 6th century basilica (refurbished in later medieval times), the ruins of a 2nd century A.D. nymphaeum immediately adjacent to the basilica, and the kilometers of high, imposing walls dating from Greek, Roman, Byzantine, and medieval occupations. 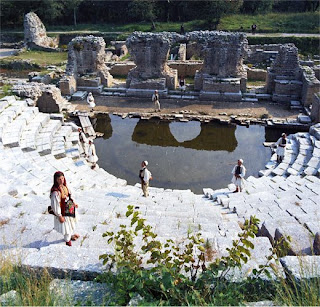 May 15, 2020
Prime Minister Edi Rama said the government intends to pass the law on the legalization of medical cannabis during this parliamentary session that will close in the summer. "I said before, this is not the time to talk about this issue, but to keep the situation under control with illegal cultivation and trafficking, the situation is now under control," Rama said. "On the other hand, we have been working on this project for more than a year, to do analysis, and in fact now the conditions are ripe. Where the ideas come from, I'm not the one fighting for copyright. This is now a global trend. I know we are on time and we will push this project forward. We are in time to approve it by this parliamentary session," said the Prime Minister.
1 comment
Read more