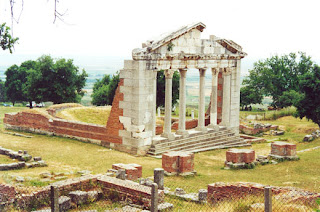 The famous Roman orator Cicero, astonished by the beauty of Apollonia named it in his Philippics, magna urbs et gravis - a great and important city. Established in the 7th century B.C., by Greek settlers from Corinth and Corcyra, the ancient city is located 11 km to the west of the modern city of Fier.
Archaeological excavations have revealed that Apollonia achieved its zenith in the 4th - 3rd centuries B.C. In the first century B.C., Octavian Augustus studied philosophy there until he heard news of Caesar's murder in theSenate and went on to become the next Roman emperor.

The city had a 4 km long surrounding wall encircling an area of 137 hectares. It has been estimated that during the developed stages of the city, 60000 inhabitants lived inside its imposing walls. Among the most interesting monuments worth visiting are the Bouleterion (city council), the library, the triumphal arch, the temple of Artemis, the Odeon built in the 2nd century B.C., the two-storey 77 m long Stoa, a theater with a capacity of ca. 10000 spectators, and the Nymphaeum (a monumental water fountain covering an area of 2000m2), which has been visited by the Roman emperor Sulla, as ancient sources indicate. In the 3rd-4th centuries A.D. Apollonia suffered great destruction from several earthquakes which were followed also by the shifting southwards of the nearby Vjosa (Aoos) river. Being deprived by its port facilities and damaged by earthquakes and Gothic invasions, Apollonia went into a rapid decline, loosing all its grandeur from the past. Today the site can be approached easily from the modern city of Fier and offers unique views over the Adriatic sea and the hinterland. 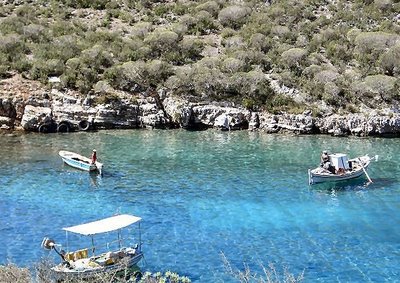