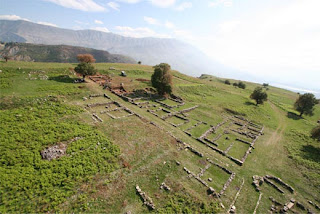 Excavations conducted by Albanian archaeologists near the modern village of Saraqinishte, mainly in the 1960s-1980s, on the hill of Jerme, on the east side of the Drinos valley, led to the identification of the fortified city with that of Antigonea. The identification is based on the discovery of fourteen bronze tesserae with the inscription ANTIGONEON, in one of the houses of the Hellenistic period.
The ancient literary sources do not mention the circumstances of Antigonea's founding or the reason behind its name. The various opinions range from Antigonos Gonatas, King of Macedonia being its founder to the most persuasive of all opinions that Pyrrhus, the Molossian king built the city in 296 B.C., in honor of his wife Antigone. Antigonea lies on a hill about 600 meters above sea level and the wall circuit is estimated to have had a length of ca. four kilometers, covering 35 hectares. The Agora of the city has been excavated and a Stoa, 59 meters long and 9 m wide has been brought to light. Coins from various city states have been found in excavations, arriving from Korkyra (modern Corfu), Apollonia, Dyrrachium, Oricum, Ambracia but also the Epirote League, most of them made of bronze and few in silver.

May 15, 2020
Prime Minister Edi Rama said the government intends to pass the law on the legalization of medical cannabis during this parliamentary session that will close in the summer. "I said before, this is not the time to talk about this issue, but to keep the situation under control with illegal cultivation and trafficking, the situation is now under control," Rama said. "On the other hand, we have been working on this project for more than a year, to do analysis, and in fact now the conditions are ripe. Where the ideas come from, I'm not the one fighting for copyright. This is now a global trend. I know we are on time and we will push this project forward. We are in time to approve it by this parliamentary session," said the Prime Minister.
1 comment
Read more