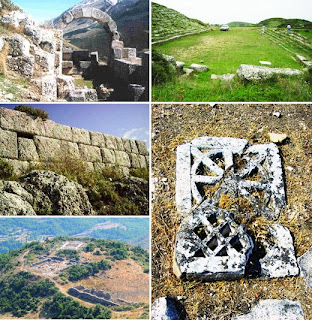 This was the capital of the Illyrian tribe of Amantes. Its ruins are in the village of Plloca in the Vlora river valley. It was founded in the fifth century B.C. and covered an area of 13 ha.
The city had its own acropolis and a Doric style temple dedicated to Aphrodite, constructed in the 3rd century B.C. The most preserved

April 23, 2020
The coastal town of Durres may not be the favourite destination of many Albanians who have grown tired of it, but it is becoming a magnet for tourists from Northern Europe who have booked some of the best hotels and resorts for the next four months. Closed to tourists for almost five decades during a communist dictatorship, Albania has a rather late tradition with tourism compared to its regional competitors, but quality investment and services over the past decade and a mix of natural and cultural heritage present since ancient times have qualified Albania as "the last secret of Europe" and a destination to visit. "This is the first group of tourists from Scandinavia and we expect more from Sweden and Norway. People from Scandinavian countries are very interested in seeing Albania and we wish them a wonderful experience," said Rolf Castro-Vasquez, director of Tirana International Airport, the only airport in the country. Charter flights will regularly connect Copenha…
Post a Comment
Read more